Here we are talking about the new 3D Printed car which has been arrived around us! This is new Strati (car) which is completely drivable and 3D printed-manufactured automobile and it is world’s first electric 3D printed car as well. This new two-seater car was brought to New York by the company on the last Tuesday. The Arizona-based manufacturers Local motors are masterminds who have discovered a Strati car generously.

According to the CEO of local motors “John Rogers”;

The Strati car has electric batteries instead of conventional engines inside the car that is why it holds only two passengers. The external body of the car is extremely amazing and unimaginable! It is a small car which looks like a race car because of its lower body feature. It has a solid structure as well as it seems too modern. It has only two leather seats on the front side. These two red leather seats were built with the goal to manufacture a sort of weave-style seats which could not give the look of cheaply made automobile. The car has also been printed in such a way that it seems to be wonderful than all. The steering of the car are also leather clad which is much solid and comfortable in using. There is also a mini room for the relaxation of your legs but, it is not for too much stretching of legs.

The car was printed at “The International Manufacturing Technology” in Chicago, which was held a few weeks back. This is a first electric car which has built almost with 3D printed parts. It took near about 44 hours to print the car which only contains all-over total 49 parts– it is particularly a smaller number as compare to the conventional vehicles which usually has more than 5,000 components the car has the maximum top speed of 40MPH. In Chicago, the people were gathered to watch the local motors team making the car and putting the parts together. The research partners were thinking that one day the people will become able to manufacture their own car in their house.

All the parts of the Strati car including wheels, tires, battery, wiring, suspension, electric motor, seats and window shield were made by using typical car manufacturing methods. 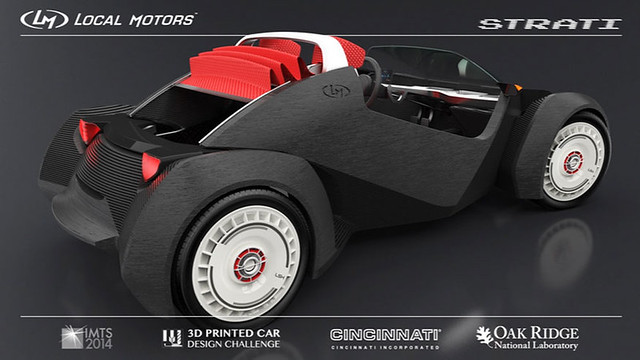 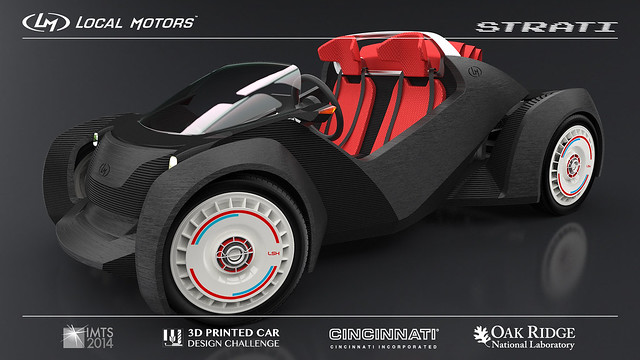 Give your feedback for this awesome car?

Marium Malick is a very skilled and competent content writer at Gadgets Informer. She has written many articles on different topics but her main focus is to write about Technology related stuff.
Be the first to comment!
Leave a reply »