The popular mobile messaging app WhatsApp is reportedly banning the users who install and use a third party Android app WhatsApp Plus that offers some additional features to access the service. This is also known as WhatsApp+ and it allows you to customize the app with different colors and themes. It further allows the users to block the contact persons from seeing you when you were last online. The users have to uninstall this app as the WhatsApp has started giving 24-hour bans to those using this third-party app.

The reason of sudden banned is to prevent the users to stop using the unofficial WhatsApp Plus app because the data could be leaked to the third parties. WhatsApp has also posted an authentic reason on its Website’s FAQ Section.

Thereby, the company is looking forward to the users to uninstall the third party app and install the authorized version of WhatsApp to get rid of the ban. You will soon be able to reuse the WhatsApp after uninstalling the fake version, as they are considering some security threats.

If you open the app, you will be greeted with the 24-hours countdown clock and a message:

“You are temporarily banned from WhatsApp because you may have violated our terms of services”.

Recently, an unofficial report was leaked that WhatsApp is testing a calling feature. Some screenshots had appeared to point the fact that voice calling is being tested in WhatsApp and that will be appear totally separate from the chatting functionality. As according to the screenshots, call logs, dialling and contact screens will be handled by separate screen. But, the news has not been confirmed yet. 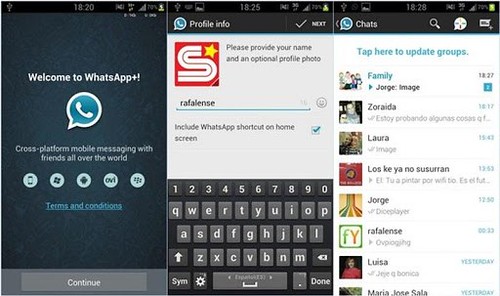 “Please uninstall your application and install an authorized version of WhatsApp from WhatsApp’s official website or Google Play Store. Then, you will be able to use WhatsApp,”
0 likes
Applications, News
AndroidApplicationsNewssmartphonesThird Party ApplwhatsappWhatsapp Plus

Marium Malick is a very skilled and competent content writer at Gadgets Informer. She has written many articles on different topics but her main focus is to write about Technology related stuff.
You might also like
AndroidApplicationsApplicationsNews
Top 4 Affordable Tablets With SIM Calling Facility
LG Announces Global Roll Out Of Its Funky AKA Smartphones
LG G4 Dual-SIM variants launched in selective countries
Top 5 Voice Recording Applications For Android
Intex Aqua N7 With 4-Inch Display Available Online
Best Android Camera Applications
Be the first to comment!
Leave a reply »