16
Hacker Leakes Sensitive Data from HBO Server
Metal Fuel the Clean Fuel of the Future
Regi Robo – An Automated Robotic Checkout System
How To Speed Up Windows 10 With Three Most Easy Methods
Moto X Play Smartphone
Facebook Seeks Patent that Could Assign Fingerprints to Cameras
How to Download Videos from YouTube?
Top 5 File Sharing Sites to Send Large Files
Microsoft has Developed its Cloud-Based Services: Azure Cloud Switch (ACS)
Top 5 Interesting Facebook Facts You Must Know About
Most Downloaded Chrome Extensions Of 2015
Facebook is Officially Working on a Dislike Button
WhatsApp Needs Only 50 Engineers To Manage Their 900 Million Users
How to Secure Wireless Connection and Prevent Stealing of WiFi?
Canon Develops a New Sensor that can Read Material on an Airplane
Sony Warns its Users Not to Take Waterproof Xperia Smartphones Underwater
NAV
NAV
TOP 10
All Time
1
How to Merge SD Card Partition with Internal Memory: Android
2
Firmware Upgradation Trick for Samsung C6712 Star II DUOS
3
How to Move Apps to SD Card without Root
4
Most Downloaded Chrome Extensions Of 2015
5
How to enable USB debugging mode
6
Change Windows 8 Start Menu with Old Classic
7
Regi Robo – An Automated Robotic Checkout System
8
Step by step procedure of installing android OS on Personal Computer
9
How to Download Videos from YouTube?
10
Top 5 Interesting Facebook Facts You Must Know About
previous
Microsoft Confirms the availability of Windows 10, on July 29
random
next
Enjoy free Wi-Fi facility in Shimla during the festival from June 1 to 7
1141 views 0 likes 0 comments

Shazam app was already well-known in the industry because of its music recognition technology for years.

To launch its new audio recognition feature, the company has partnered with many other companies from different industries that are including, Hearst, Blue Soho, Time Inc and Disney for its Tomorrowland movie. 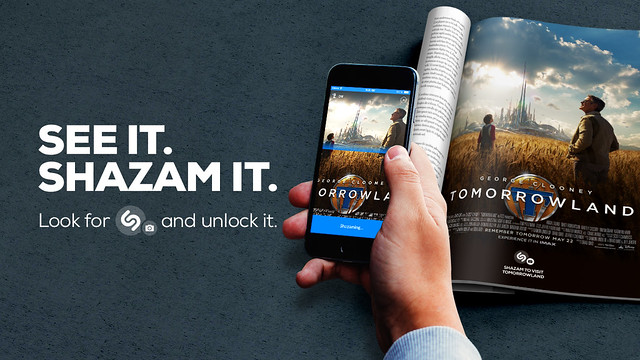 “The introduction of visual recognition is another step on our journey to extend the ways people can use Shazam to engage with the world around them.”

“For brands, we’re providing a near-frictionless way to engage customers on their mobile devices, with a single tap of a button.” Said Rich Riley, Chief Executive Officer, Shazam.

As for example, to scan the print ad for Disney’s “Tomorrowland” movie can bring you into a virtual space that would allow users to access information and video clips related to that flick. Some other partners including Time Inc and Condé Nast, who are starting by making some of the content of their magazines SELF and Sports Illustrated identifiable and interactive.

Shazam’s new recognition feature will automatically recognize the content and then it will bring the users to interactive contents which would be specified by the brand, that also includes augmented reality videos and experiences as well.

If you are willing to try out the new feature of Shazam app, then you have to hold your device 4 to 7 inches away from the interactive image, and give your camera some time to focus on it. If you’re scanning in a dim light then you can also use the flash on your device.

The users can see live update of Shazam app as the Shazam visual is currently available live on the iOS App Store.

Marium Malick is a very skilled and competent content writer at Gadgets Informer. She has written many articles on different topics but her main focus is to write about Technology related stuff.
You might also like
NewsApplicationsNews
Google New Logo Reveals for The Company
Apple To Replace iPhone 6 Due to Faulty Cameras
New Battery Can Charge Your Smartphones in 6 Minutes
Microsoft’s most loved Windows 95 completes 20 years today
Apple Is Updating Its Magic Mouse And Wireless Keyboard Soon
How To Install And Use WhatsApp Without SIM Card
Be the first to comment!
Leave a reply »