16
Hacker Leakes Sensitive Data from HBO Server
Metal Fuel the Clean Fuel of the Future
Regi Robo – An Automated Robotic Checkout System
How To Speed Up Windows 10 With Three Most Easy Methods
Moto X Play Smartphone
Facebook Seeks Patent that Could Assign Fingerprints to Cameras
How to Download Videos from YouTube?
Top 5 File Sharing Sites to Send Large Files
Microsoft has Developed its Cloud-Based Services: Azure Cloud Switch (ACS)
Top 5 Interesting Facebook Facts You Must Know About
Most Downloaded Chrome Extensions Of 2015
Facebook is Officially Working on a Dislike Button
WhatsApp Needs Only 50 Engineers To Manage Their 900 Million Users
How to Secure Wireless Connection and Prevent Stealing of WiFi?
Canon Develops a New Sensor that can Read Material on an Airplane
Sony Warns its Users Not to Take Waterproof Xperia Smartphones Underwater
NAV
NAV
TOP 10
All Time
1
How to Merge SD Card Partition with Internal Memory: Android
2
Firmware Upgradation Trick for Samsung C6712 Star II DUOS
3
How to Move Apps to SD Card without Root
4
Most Downloaded Chrome Extensions Of 2015
5
How to enable USB debugging mode
6
Change Windows 8 Start Menu with Old Classic
7
Regi Robo – An Automated Robotic Checkout System
8
Step by step procedure of installing android OS on Personal Computer
9
Top 5 Interesting Facebook Facts You Must Know About
10
HTC EVO 3D Won’t Turn On After Unexpectedly Turned Off
previous
WhatsApp, Viber, and WeChat to Now Work With Ok Google Function on Android Smartphones
random
next
How To Install And Use WhatsApp Without SIM Card
844 views 1 like 0 comments

90% Humans Replaced By Robots In A Chinese Factory, Leads To Increase In Production

These days numerous techniques have emerged to develop the science of robotics and robots. 90% of Humans Replaced By Robots in a Chinese factory.It won’t be a surprise that sometime in future all of human jobs would be taken by robots.

Looks like this hold true within the case of the new robotic hands at the Changying Precision Technology Company that has an unmanned factory setup in Dongguan town which is nearly controlled and run by robots.

According to the People’s Daily, the factory has been speedily enlarging the facility’s production capability from 8,000 things per employee to 21,000, that is nearly 3 times the output. The result are fascinating. 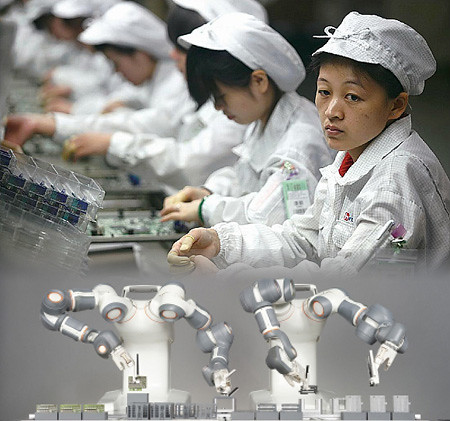 The Changying Precision Technology Company has replaced virtually 90 percent of human employees with machines in an endeavor created to move towards absolutely machine-controlled production of cell phones. The company consisting the staff of 650 individuals has been reduced to only 60. Luo Weiqiang, the general manager of the company, told the People’s Daily that the amount of workers may drop to 20 within the future, within the not-so-distant future.

At a same time, the quantity of robots can be increase near to 1,000. Chen Qixing, the company’s president told, that our mission is to succeed in 80 percent automation level in the factory.

Presently, there are nearly 60 robotic workers, that are working 24 hours a day on 10 production lines, reported by The Times Of India. Furthermore, nearly each piece of machine equipment, including transporting of factory-made goods in trucks are unmanned, because the warehouse used to be completely run by robots.

There are still some of the employees working in the factory. 3 of the employees check and monitor every production line and there are other workers who monitor a computer system. According to the People’s Daily, there has been a 162.5% increase in output production, because the production per person has been increased from 8,000 pieces to 21,000 pieces.

According to the International Federation of Robotics (IFR). China already was the biggest market for industrial robotics in 2014, with the selling of about 60,000 robots .

Marium Malick is a very skilled and competent content writer at Gadgets Informer. She has written many articles on different topics but her main focus is to write about Technology related stuff.
You might also like
Newsnew technology gadgetsNews
Google New Logo Reveals for The Company
Apple To Replace iPhone 6 Due to Faulty Cameras
New Battery Can Charge Your Smartphones in 6 Minutes
Microsoft’s most loved Windows 95 completes 20 years today
Apple Is Updating Its Magic Mouse And Wireless Keyboard Soon
How To Install And Use WhatsApp Without SIM Card
Be the first to comment!
Leave a reply »